I looked at Harris’s entry on Wikipedia yesterday and discovered that someone had updated it with the following information:

In December 2008, Scrapple Records issued a recording of Jeremy Woodruff’s Tunebook A as realized by the AB Duo (Seth Meicht and Jeremy Woodruff on saxophones and flute), a work dedicated to Wulfson.

“Too Much for a Pogie” by AB Duo. “Tunebook” by Jeremy Woodruff (realized by AB Duo). “Tunebook” includes recordings of Seth Meicht and Jeremy Woodruff on saxophones and flute. Created in New York City and Berlin, Germany from July-September 2007 (Pogie) and July-November 2008 (Tunebook). “Tunebook A” is dedicated to Harris Wulfson (1974-2008). 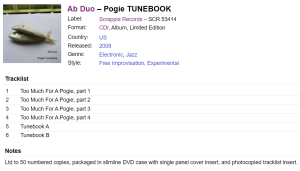